Original Burial or Civic Reburial—Do You Really Know Where Your Ancestors are Laid to Rest?

I’ve found King Richard III to be more fascinating in death than in life—the improbable discovery of his remains under a parking lot; information pulled from his skeletal DNA (including a nonpaternity event); a reexamination of his tarnished legacy; and debates over his final resting place. I devoured it all. The timing of Richard III’s discovery just as my focus on Barnabas Horton kicked into high gear felt more than a coincidence. It was providence. Like the forensic examiners painstakingly dissecting King Richard’s remains, I couldn’t let Barnabas rest in peace. I wanted to poke and prod. What secrets could his burial site reveal under relentless scrutiny?

Puritan gravestone iconography was an obvious place to start,[1] but Barnabas’s stone bears text only—no hollow-eyed skull, no pudgy-cheeked cherub. I moved on to funeral customs. Did you know that Puritans sent gloves as an invitation to a funeral and afterwards distributed mourning rings to family members and high-status individuals? Interesting, yes, but I found no evidence of these norms in Southold. Digging up the Dead: A History of Notable American Reburials by Michael Kammen altered my approach. I would stop looking in seventeenth-century records and focus on more recent records for clues regarding Southold's Old Burying Ground in general, and Barnabas's in particular.

Kammen points out that “[a] widespread desire to ensure the perpetuity of graves dates only from the 1790s and early 1800s…. The related practice of visiting graves to pay respects…emerged gradually and became customary only as late as the 1840s (17).” The practice of “[e]xhuming and relocating remains,” he continues,”had rather little connection with the prevailing Protestant eschatology and everything to do with the needs of the living (20).” Driven by patriotism (both national and regional), ancestor worship, and the commercial development of privately-owned cemeteries, “Reburial was quite literally a civic occasion…rather than an ecclesiastical event. Principal speakers devoted their eulogies or remarks to the individual’s historical importance, not his divine destiny (21-22).”

Colonial public figures, originally buried in unmarked graves who were later reburied with civic ceremony, include Miles Standish (of Mayflower fame), George Whitefield (an Anglican preacher well-known in the American colonies), and Roger Williams (founder of Rhode Island). Self-proclaimed Governor of New York, Jacob Leisler, was hanged for treason in 1691, exonerated in 1695, and re-interred with appropriate pomp and circumstance soon afterwards, Examples of civic reburials (real or symbolic) on Long Island are easy to find: Honorable Mahlon Dickerson erected a marble obelisk to commemorate his Southold ancestors in 1851;[2] Nathaniel Sylvester received his memorial on nearby Shelter Island in 1884; Reverend Epher Whitaker spearheaded the effort to erect Founders Monument in 1890;[3] President Theodore Roosevelt dedicated an over-sized monument to Captain John Underhill in 1908, in Oyster Bay; and ancestors of Reverend John Youngs outfitted his grave site with a heraldic slab in 1935.[4]

I believe Reverend Whitaker masterminded much of today's Old Burying Ground in Southold, particularly its ancient and historic sections. His ministry in Southold (1851–1891) began with the dedication of the Dickerson momument and ended with the Founders Monument. In his own words, the “cemetery…doubled in extent” under his watch.[5] He likely supervised the relocation of three tablestones from Orient to the hamlet of Southold,[6] an undertaking driven more by local patriotism than religious necessity. Today, a wide array of people visit the cemetery, prompting Southold's foremost cemetery docent, Melissa Andruski, to tailor her tours of the Old Burying Ground to specific interests—tourists, local adults, and school children.

Unfortunately, time has been unforgiving to the ancient markers. Three hundred years of wind and rain have worn smooth horizontal markers made of soft, red sandstone. Those carved from durable slate are cracking and splitting. All are susceptible to invasive lichens and discoloration from air-borne pollutants. A large crack threatens to break Barnabas's tablestone in two from repeated freezing and thaws. More photos are included in Appendix III of my book (My thanks to Fred Andrews for the use of his photos, below). 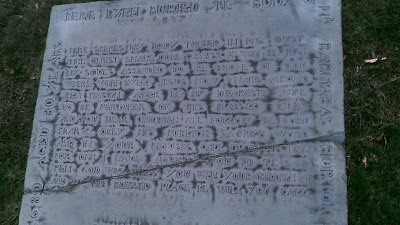 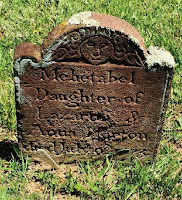 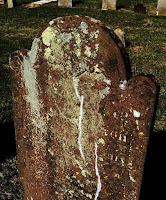 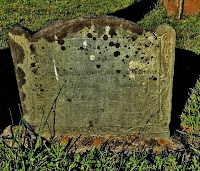 Fortunately, Reverend Whitaker's work has been taken up by a group of volunteers dedicated to restoring and preserving Southold's Old Burying Ground. Cemetery Director Jane Andrews has written a new guide with lush photographs and short biographies of notable "residents." Two years ago, Jane and her committee set aside $45,000 to fund Phase I of a preservation initiative—hiring a professional conservator to photograph, catalog and evaluate hundreds of markers in preparation of Phase II—securing foundation grants, training volunteers to clean and stabilize less damaged stones, and hiring professionals for more complicated repairs. They were awarded a $22,500 matching grant from the Robert D.L. Gardiner Foundation and have planned fundraisers to maximize this award. I encourage readers to consider making a tax-deductible contribution to this multi-year preservation effort before year's end. Checks (payable to "The Old Burying Ground") may be sent to Southold Presbyterian Church, P.O. Box 787, Southold, NY, 11971 or with a credit card by clicking here.

Did my research reveal anything new about Barnabas's tablestone? In short, no. I can offer only personal opinion rather than fact. But since this is a blog, that's okay. I'd guess there's a 50-50 chance that Barnabas's remains are buried beneath his tablestone. The town formally hired a grave digger six years before he died, but burials on private home lots were common during this time (more so perhaps, the greater distance one lived away from town). The slate slab was likely purchased and inscribed in the mid- to late-18th century, by a son or grandson of Jonathan Horton, who died in 1707. This opinion stems from two elements on the stone. First, the inclusion of the honorific Mr. By strict 17th-century, socioeconomic standards, Barnabas—a baker—would never have been considered for this title. By the 18th-century, however, its use had become a more widespread term of respect. Second, there appears to be enough space left on the slab for one more inscription. Perhaps the family member who commissioned the stone did so not only to honor his immediate ancestors, but in the hope that his name would one day be eternally linked with theirs. The economic depredations brought on by the American Revolution likely preserved this emptiness. Patriot Southolders, not killed in battle, fled to Connecticut in droves, while occupying British forces commandeered every commodity to supply their war effort—livestock and grain filled the bellies of their soldiers in New York City, felled North Fork trees kept those same British soldiers warm in winter, and plundered metals lined British officers' pockets or armed their weapons. Legend has it that the lead tablet missing from Reverend Hobart's tablestone was taken during the American Revolution and melted down to make bullets. The area remained economically depressed until 1844 when the railroad finally reached the North Fork, connecting the eastern village of Greenport to the city of Brooklyn. 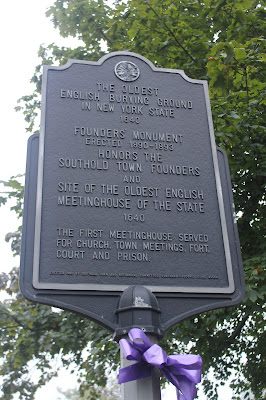 I end with a toast given at Southold's Bicentennial Celebration, fitting for its Old Burying Ground residents: Engrave deep on memory's tablet their virtues, bury deep their faults and errors!

Well, hopefully not too deep.