One of the most enjoyable tasks of self-publishing Barnabas’s biography was choosing an image for the book’s cover. The graphic team I hired created several compelling options to consider. While they did the hard work, I sat back, relaxed, and had fun choosing the winner. Then, having decided on a front cover, I realized that there was no stopping the transformation of my electronic manuscript into a printed book. It didn't matter that I had zero sales, I would soon be a published author! But why use an abstract profile of a Puritan rather than a clearly visible face? One reader sent me an email asking this very question—why didn’t I include an image of Barnabas Horton in the book? She was referring to the cameo depicted below.


The answer is that I deliberately chose to exclude this image in order to squash yet another Barnabas myth. The picture, well-known to many Horton descendants, is not of the immigrant Barnabas, but of Jonathan Goldsmith Horton. Look at the image above and you will clearly see Jonathan’s initials, J. G. Horton, where the lapels of his suit overlap.  (I assume the artist’s initials are to the left).

Although I knew that Jonathan G. (1789–1872) was the last owner of Barnabas’s wood-framed home, I found another piece of information about him more intriguing. George F. Horton reported in his Chronicles (1876) that Jonathan Goldsmith Horton had had Barnabas’s tablestone relettered in the early 1800s. In the hopes of finding direct evidence of this, I spent an afternoon at the Queens Borough Public Library reading through a manuscript collection called Horton Family Miscellaneous Papers (1828-1865). It purported to include documents relating to the administration of the estate of Captain Jonathan Horton by his sons, Jonathan G. and Renssalear. I thought Jonathan G. may have used the occasion of his father’s death (ca. 1830) to spruce up the family’s many grave sites, including the immigrant patriarch’s.

Unfortunately, while archival tidbits brought “Uncle Goopie[1]” and his siblings to life, the collection shed no light on the relettering of Barnabas’s slate tablestone. Rather, I left the library thinking that Jonathan G. was either a tightwad or too impoverished to consider such an outlay. Documents had revealed that Captain Jonathan’s widow took her sons Jonathan G. and Renssalear to court when they stopped paying her monthly allowance stipulated in their late father’s will.

So for the time being, the circumstances of the tablestone's relettering remain unknown but the well-known face now has a name—Jonathan Goldsmith Horton. 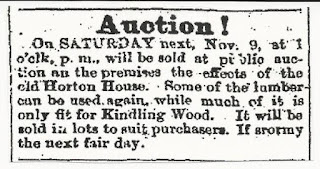 [1] “Uncle Goopie” was a term often used by Southold Town Historian, Wayland Jefferson, for Jonathan G.  in various newspaper articles he wrote during the 1930s and 1940s.