Over the course of writing this book, I spent a lot of time pondering whether or not Barnabas knew how to write, including penning his own name. I knew it wouldn’t change my opinion of him. He would remain a resourceful and pragmatic tradesman with or without this particular skill. Curiosity drove me. Several people pointed out that his signature regularly appeared in Southold’s town record books. What better reason to sit at a microfilm reader at the Southold Free Library for hours?[1] After reading and comparing dozens of pages, I concluded that Barnabas took oral depositions which were then recorded by the town clerk. A dead end.

I then considered probate documents and came across another Barnabas "signature." This time as one of five witnesses to Thomas Terry's will, written in 1671. Inconclusive again. The signatures I kept finding were too dissimilar to have been written by the same man, even across time.

The only original document guaranteed to have his personal signature or mark would be Barnabas's own last will and testament. Did it still exist? The search was on.

In late fall of 2014 while randomly googling on my computer, I came across an image of a blueish, carbon copy of a typed transcription of Barnabas’s will. A handwritten note in the margin said the transcription was made by the last known owner of the document.[2] Several mouse clicks later, I had the names and addresses of the owner’s last known family members. I carefully crafted a letter explaining my book and interest in Barnabas’s will. I dropped the letters in the corner mailbox with the expectations of someone flinging a message in a bottle into the vast ocean. How long would it take to get a response—if ever? How on earth did genealogists accomplish as much as they did before the internet?

I heard back within a month. My postal inquiry had triggered an exchange of emails among the four children of the will’s last owner—Peg (97), Allan (93), Alice (90), and Betty (87). The older siblings remembered the will while the younger ones did not, yet they all agreed that the treasured document was likely put in safekeeping at the family’s summer retreat in northern New Hamphsire. What an exciting addition to Barnabas’s biography! When could I see it? Mindful of my impending publication date, the siblings tried to brainstorm a solution, but access to the house was already blocked by deep snow and would remain impenetrable until the spring thaw. I knew I couldn’t rewrite the text and related footnote without significantly altering page numbers which would, in turn, delay publication and increase my expenses. With mixed emotions, I decided that any information revealed by the will would have to wait for a second edition.

I made two trips to New Hampshire in the summer of 2015, after the book’s publication. The first trip included a lively lunch with Allan and Betty, swapping stories and Barnabas lore. The second was to their family homestead for a viewing of the will. I missed meeting Peg, but Alice and her family were wonderful hosts, and graciously allowed me to take lots of photos to share with Horton cousins everywhere. (Once again, I'd like to express my thanks to Peg, Allan, Alice, Betty and their families!)

The will is beautiful. Cramped text fills one side of parchment. It's smaller than the two copies I had previously come across.[3] It appears to have been framed in the early 20th century by a professional archivist and is stored in a closet away from any light source, perhaps an added layer of preservation in the days before UV-filter glass. A reverse-negative facsimile was created and placed on the protective cover. The text reads like the copy entered into the Suffolk County court minute book at Riverhead, NY.

At long last, in front of me was Barnabas’s signature—a little shaky perhaps, but genuine. 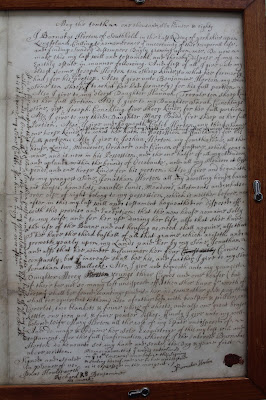 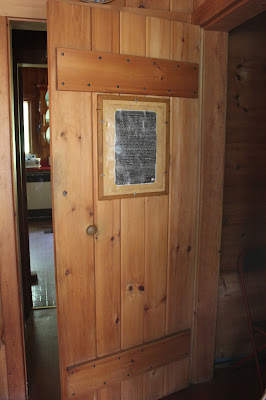 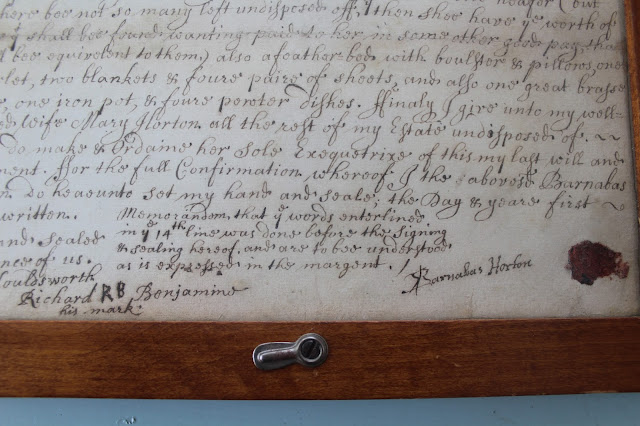 [1] They are now available online at the website of Southold’s Town Clerk (click here).
[2] The owner of the will was named, but out of consideration for the family’s privacy, I won’t reveal it.
[3] One entered into the Suffolk County Court of Sessions minute book in Riverhead, New York. The other is held by the Suffolk County Historical Society, also in Riverhead.
Posted by Unknown at 11:32 AM No comments: